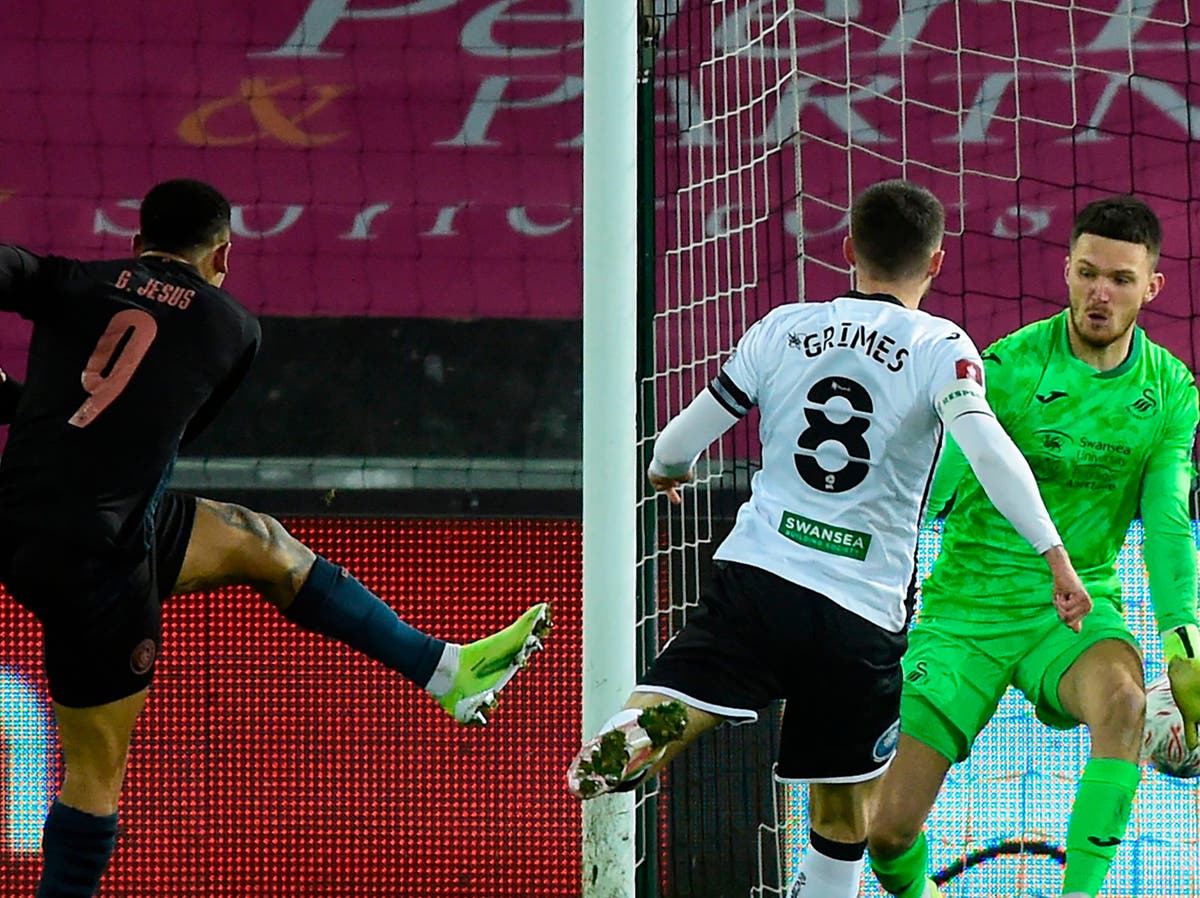 Kyle Walker, Raheem Sterling and Gabriel Jesus all scored for the visitors as Pep Guardiola‘s team earned a 15th straight win across all competitions, a record for a top-flight English club, with Morgan Whittaker netting a consolation goal for Swansea with 13 minutes left on the clock.

Preston, in the 1891/92 season, and Arsenal, in 1987, previously held the joint record of consecutive wins by English top-flight clubs across all competitions (14).

Man City and Swansea met at the quarter-final stage of the FA Cup two years ago when the visitors won a controversial Liberty Stadium tie 3-2 en route to lifting the cup. After levelling through a contentious penalty, Sergio Aguero scored a late winner despite replays indicating he was offside and with VAR not in operation.

Both Aguero, who was back in Manchester building up his fitness after testing positive for coronavirus, and VAR were absent this time as Guardiola made seven changes from the side that won 4-1 at Liverpool on Sunday. American goalkeeper Zack Steffen started behind an entire new back-four unit, with Rodri, Bernardo Silva, Ilkay Gundogan and skipper Sterling the only survivors of the Anfield victory.

Swansea, riding high in the Championship and eyeing a return to the Premier League, gave a first start to United States striker Jordan Morris following his January loan arrival from MLS side Seattle Sounders.

Morris had few chances to show his impressive pace in a first half which the visitors dominated and had chances to take the lead before it arrived from an unlikely source in the shape of Walker.

Swansea goalkeeper Freddie Woodman saved early efforts from Jesus and Gundogan as the pressure was cranked up. Jesus and Aymeric Laporte then failed to find the target from gilt-edged openings and Ferran Torres brought two more stops from Woodman.

But the charmed life that Swansea’s goal had been leading was finally over after 30 minutes. Walker’s cross was aimed towards forwards in the middle, but neither Torres nor Jesus could apply a touch and the ball evaded everyone to nestle in the far corner of Woodman’s net for only the fifth goal of the England defender’s City career.

Swansea responded well to falling behind and Connor Roberts sent over a cross which Jay Fulton headed narrowly wide. Yan Dhanda’s chip also set up Jamal Lowe for a near-post effort that was blocked by Eric Garcia.

But Swansea’s hope was extinguished in brutal fashion immediately after the break.

Rodri split the Swansea defence within two minutes of the restart and Sterling swept home his 12th goal of the season. Three minutes later Jesus rifled home to make it four goals in as many starts, his best run since scoring in seven straight starts between April and October 2019.

City had further chances to extend their lead, but the flow of the contest was interrupted by a raft of substitutions with Guardiola and Swansea’s Steve Cooper turning their thoughts to weekend league action.

There was a scare for Guardiola as Rodri limped off and a Swansea consolation when Whittaker claimed his first goal following his deadline day arrival from Derby.

Whittaker controlled Ryan Manning’s cross and fired past Steffen as the visitors conceded for only the fifth time in their 15-game winning streak.

Police are appealing for witnesses following an incident where drivers of a BMW evaded police. EDP24 News …

A Norfolk non-league side is blazing a trail in the fight against football-related dementia by banning its youth players from heading balls in training – and is calling on others to do the same. EDP24 News …

Councillors have retired to consider whether to grant a license to turn a meadow into a wedding venue. EDP24 News …

The coronavirus infection rate for Norfolk and several of its districts has passed a new record high. EDP24 News …