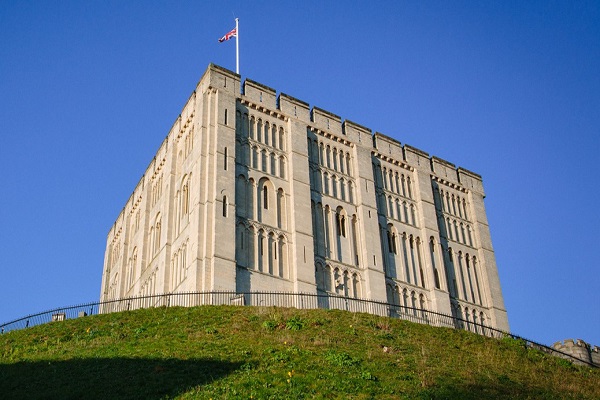 One of Norwich’s most famous landmarks, Norwich Castle was built by the Normans as a Royal Palace 900 years ago. Explore the Castle's history as a palace and later as a prison, and enjoy our fabulous collections of fine art, archaeology, and natural history as well as the Royal Norfolk Regimental Museum collections.

For many centuries Norwich has been dominated by its great castle, a symbol of military and political control founded by the Normans between 1066 and 1075 to help keep their newly acquired kingdom in subjection.

The conquered Saxons were forced to raise a mound, some twenty-one metres high and surrounded by a dry ditch, at the end of a prominent ridge of land. A wooden palisade protected the timber buildings on top of the mound, while to the south and east of the mound were yards or baileys that protected by banks and ditches. The castle was built at the King's expense and was held for him by Earl Ralf of East Anglia. In 1075 Ralf, with two other earls, plotted against William I.

The King was told of this, and Ralf fled to Brittany, leaving his wife Emma to hold Norwich Castle against the King's army. After three months she surrendered, but in recognition of her bravery was allowed to join her husband.
Norwich Castle has been besieged several times. At the beginning of the reign of Henry III it was captured by Louis, the Dauphin, or heir to the King of France, who had been invited by a group of English barons to take the English throne. Louis also captured several other castles, but was eventually paid a large sum of money to give them up and return to France.

In 1887 Norwich Corporation bought the castle, carried out still more repairs and, after stripping the interior of the keep and inserting a gallery, converted the keep and most of the prison buildings into a museum and art gallery, which was opened by the Duke and Duchess of York (later to become King George V and Queen Mary) on 23 October 1894. Since then the museum has been considerably altered and extended, with additions such as the Colman Galleries (1951), the Modern Art Gallery (1965) and the central Rotunda (1969), where visitors can relax at the coffee bar. Changes are still being made: the Twining Teapot Gallery has opened (September 1989) and the Shirehall, linked to the Castle Museum by the passage used to take prisoners from their cells to the courtroom, will become the new Norfolk Regimental Museum (midsummer 1990).

Probably the most important exhibit in the Castle Museum is the keep itself. Traces of the Norman rooms can still be made out, including the apse of the chapel and the fireplace in the great chamber, while the great well, thirty-six metres deep, remains intact and can be seen through a grille in the existing floor. Sometimes there are conducted tours of the dungeons and the battlements - the view from the battlements is quite magnificent, encompassing much of Norwich.

Visitors to the dungeons can see chains and shackles used on prisoners in the castle, a pair of stocks, a scold's bridle, a gibbet iron and death masks of some of the murderers hanged in Norwich Castle.