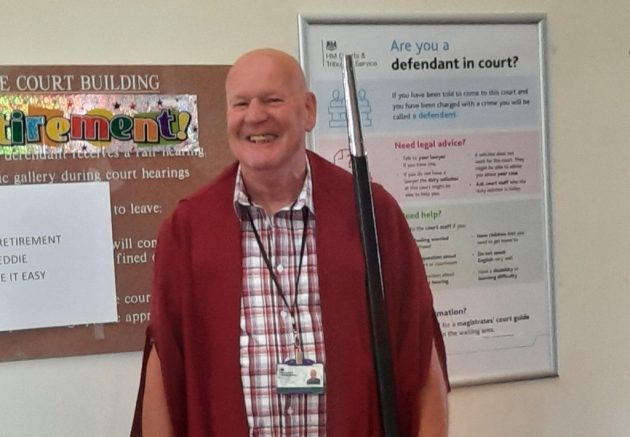 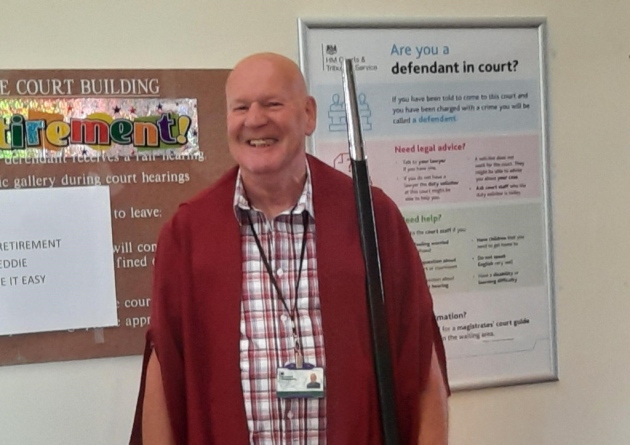 Eddie Davis, 78, has been looking back on 17 years as usher at Great Yarmouth Magistrates’ Court. Picture: Michelle Cone.

A retiring court usher has been looking back on 17 years of helping to keep the wheels of justice turn – with the standout memory the time a defendant ran from the courthouse and jumped in the River Bure.

Eddie Davis, 78, retired from his role as usher at Great Yarmouth’s Magistrates Court on Friday (July 31).

“I remember we once had a defendant ready to go into court, his solicitor was sitting in court waiting for him, but I had to tell the solicitor the defendant had gone out of the courthouse, jumped into the river and swam upstream,” Mr Davis said.

“The solicitor thought I was joking, but we rushed out and called the police, they found him and took him back to court.

“He was dripping wet.”

Mr Davis, originally from London, moved with his wife Maria to Norfolk in 2003, first living in Scratby and later moving to Gorleston.

“We really liked the area, we had holidayed here in the past. The house in Scratby was just what we’d wanted,” Mr Davis said.

His work as usher also took him to magistrates’ courts in Norwich, King’s Lynn, as well as Cromer and Lowestoft courthouses before they closed down.

He said the job changed over the years, especially after the introduction of video links.

“When I started it was all about getting people from the waiting areas into the court itself. I was a go-between the legal advisers and the people out in the concourse. Liaising with the public, making sure they got into court smoothly as possible.

“It involved a lot of running around. The job’s changing now. It’s a different way of working now. In my time it was mostly dealing with the public which is a job I enjoy doing, meeting people.

You may also want to watch:

“Even the roughish people you have to respect. I had to treat everybody the same,” he said.

Mr Davis said it had been a privilege to be able to work with his colleagues.

Michelle Cone, court customer services manager, paid tribute to Mr Davis, saying: “Despite every year saying he was going to retire Eddie continued to provide an excellent ushering service to all, always being dedicated and hard working to his role.

“Eddie has done nothing but give the courts his all and is nothing but a true gentleman who has been an absolute pleasure to work with, nothing has ever been too much trouble and however stressful the courts or his day has got he always has a smile on his face.

“Now, at 78, the year has come where he has decided to retire, along with his good wife Maria, who also retired this year.

“I hope they have a happy, healthy and relaxing retirement together,” Ms Cone said.

If you value what this story gives you, please consider supporting the Eastern Daily Press. Click the link in the orange box below for details.

Police are appealing for witnesses following an incident where drivers of a BMW evaded police. EDP24 News …

A Norfolk non-league side is blazing a trail in the fight against football-related dementia by banning its youth players from heading balls in training – and is calling on others to do the same. EDP24 News …

Councillors have retired to consider whether to grant a license to turn a meadow into a wedding venue. EDP24 News …

The coronavirus infection rate for Norfolk and several of its districts has passed a new record high. EDP24 News …

Getting Norfolk straight back into Covid tier one after lockdown is the aim, the county council leader said. EDP24 News …