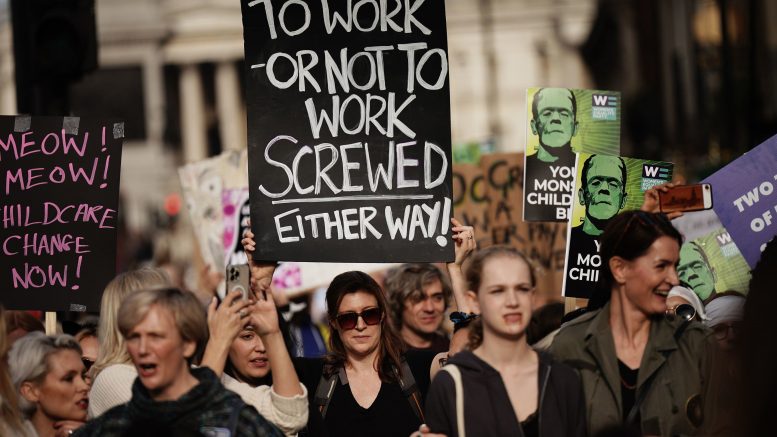 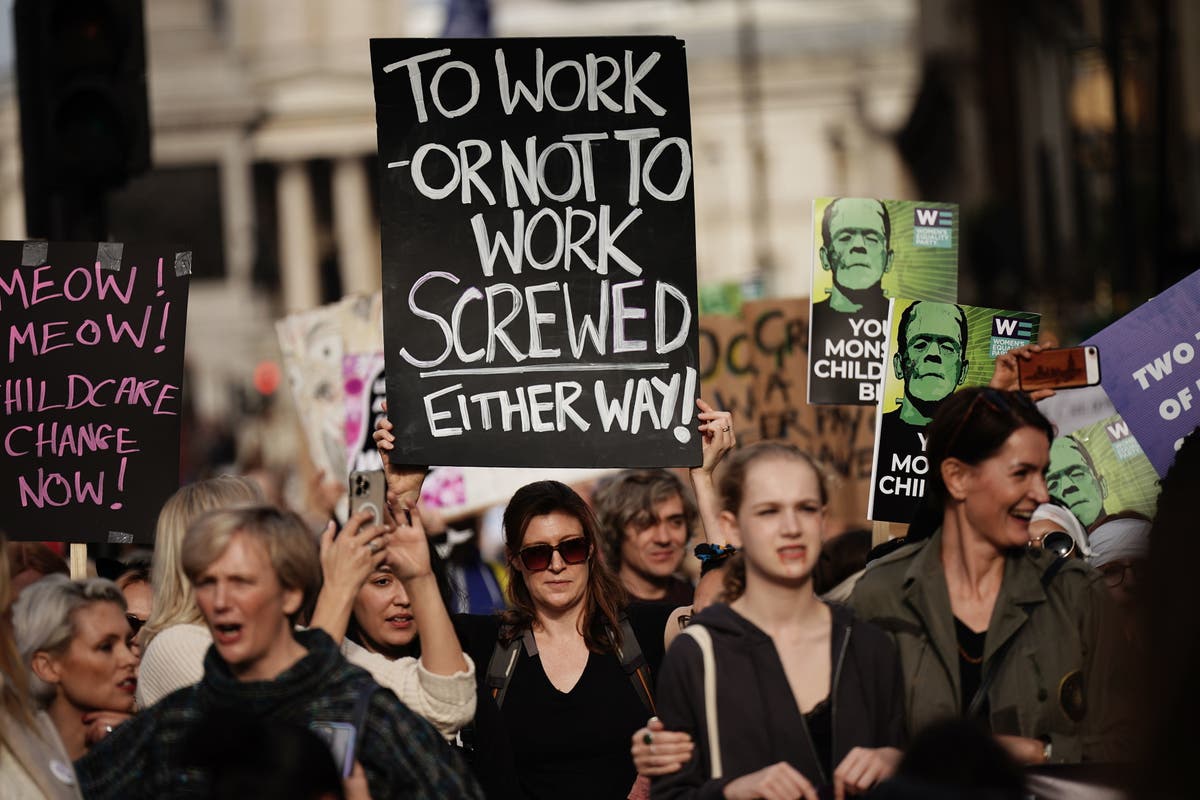 Thousands of protesters have taken to the streets, calling on the government to reform the childcare sector and parental leave.

In London, Mothers gathered outside Downing Street on Saturday shouting: “Dear Rishi Sunak, we want our choices back,” as they protested against unaffordable childcare and parental leave structures.

The family-friendly march, organised by the campaign group Pregnant Then Screwed, had demonstrators donning Halloween outfits including witches’ hats, as well as skeleton and vampire costumes.

Protesters held banners reading: “My skills got me hired” My work got me fired!” and “Affordable childcare now,” as they marched to Parliament Square.

Similar protests are taking place in other cities across the UK, including Glasgow, Birmingham, Manchester and Norwich.

Labour MP Stella Creasy joined singers from choir MumSing who performed on a float outside the Houses of Parliament adorned with pink banners reading “March of the Mummies“.

Mothers carrying babies and young children danced and sang while others stood back holding banners reading “The future won’t raise itself”.

Pregnant Then Screwed founder Joeli Brearley encouraged the crowd to “force [the government] to listen” to the voices of mothers.

“When the policymakers finally do something … they’ll pretend it was all their idea, but we will remember this moment.”

Mandu Reid, leader of the British Women’s Equality Party, accused the government of leaving mothers to work on “pittance wages” while raising children.

“Underpaid, undervalued, largely women workers” were paying the cost for the “failures” of the political system, she added.

“We can win this,” Ms Reid said. “We won’t stop until our political system fixes the problems it’s created.”

An estimated 54,000 mothers a year leave the workforce due to employer discrimination for being pregnant and new mothers.

“We’re tired of being ignored and pushed to the bottom of the pile,” Ms Brearley wrote in The Independent. “As things stand today, we have the second most expensive childcare in the Organisation for Economic Cooperation and Development (OECD), the third worst ranking maternity benefit, and the worst ranking paternity benefit in Europe.

“We’ve spoken to thousands of mothers and 31 per cent of new parents will not be able to afford to have any more children, and 48 per cent of pregnant women will have to cut their maternity leave short due to financial hardship,” she added.

A recent survey conducted by the campaign group revealed that 31 per cent of new parents will not be able to afford to have any more children, and 48 per cent of pregnant women will have to cut their maternity leave short due to financial hardship.

Data from the Office of National Statistics shows that the number of people who aren’t working due to childcare commitments is at its highest since May 2020.

Figures showed that 43,000 women left the workforce to look after family in the last year, a three per cent increase on the previous year.

Welcome to my home town: Why Norwich is much more than the butt of Alan Partridge-related jokes

‘A tale of triumph and tragedy’: Calls for black Victorian circus owner to be included in national curriculum