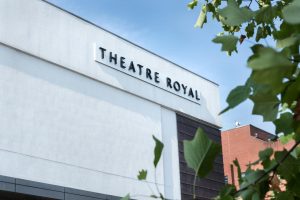 Norwich Theatre Royal is one of East Anglia’s premiere venues seating just over 1300 people and featuring a wide range of shows and performances.

These range from the UK tour of Miss Saigon and the musical hit Calendar Girls through to top-class stand-up from the likes of Jason Manford and Jimmy Carr. It also features dance by the likes of Matthew Bourne’s New Adventures, Northern Ballet and Rambert, plus opera and family shows including its hugely popular pantomime which attracts big names and is a must-see in the city over Christmas and New Year.

Performing has happened in and around the site of Norwich Theatre Royal since 1758 when a Georgian theatre was built on Millennium Plain on the site of what is now The Forum – and it became known as the Theatre Royal 10 years later.

The theatre has been demolished and rebuilt twice and even survived both World Wars. It re-opened in November 2007 after a £10 million refurbishment dramatically improving facilities in the auditorium and also gave CD quality sound in every seat.

The theatre attracts thousands of people every year and is seen as the flagship theatre of East Anglia, attracting visitors from across the region.

Be the first to comment on "Norwich Theatre Royal"